StarCraft II: Legacy of the Void

On November 10, more than five years after the launch of StarCraft II: Wings of Liberty, the second and final standalone expansion StarCraft II: Legacy of the Void was finally launched. Blizzard was kind enough to give us a copy of the Collector’s Edition for our review. Keep reading to find out if Blizzard’s latest title is worth buying, particularly in this special edition. 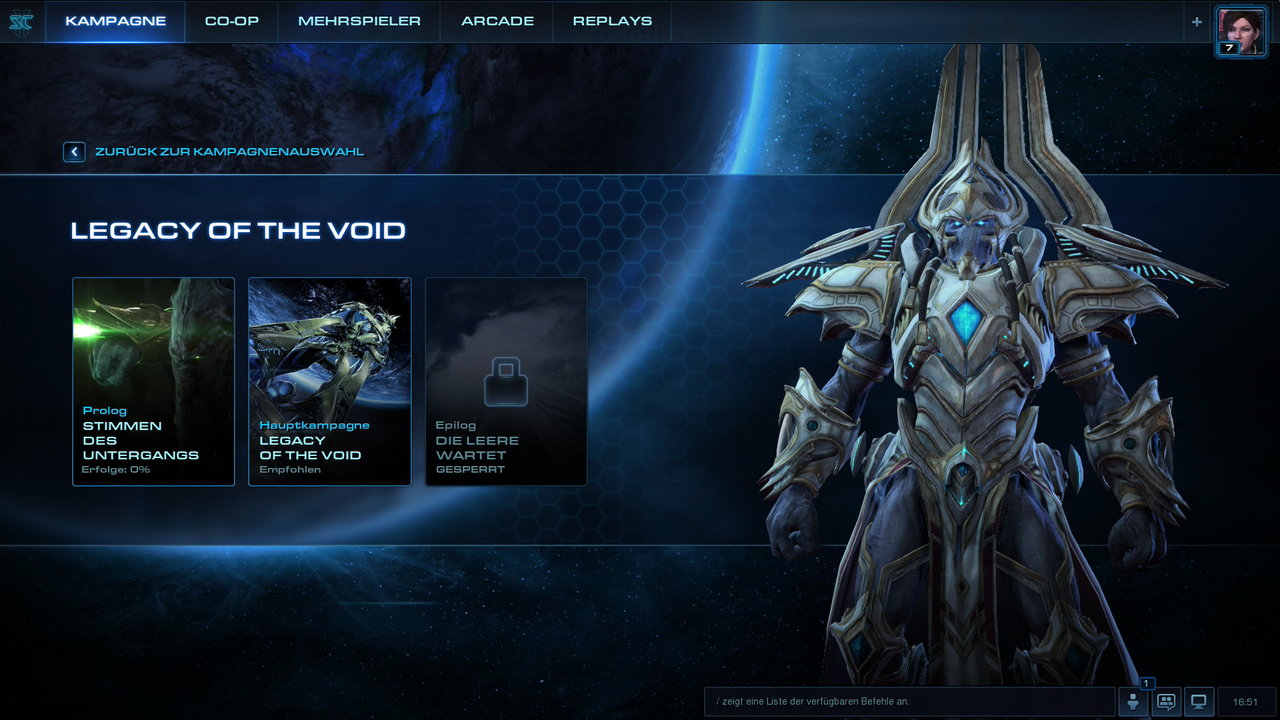 What’s in the Collector's Edition? Well, let’s check under the hood, shall we? For about 40 extra bucks, the Collector’s Edition includes quite a bit of stuff: the game itself, the soundtrack a behind-the-scenes DVD & Blu-ray, and a “field manual” with additional information and images of the individual units. I think more than anything else, the field manual is the real icing on the cake. 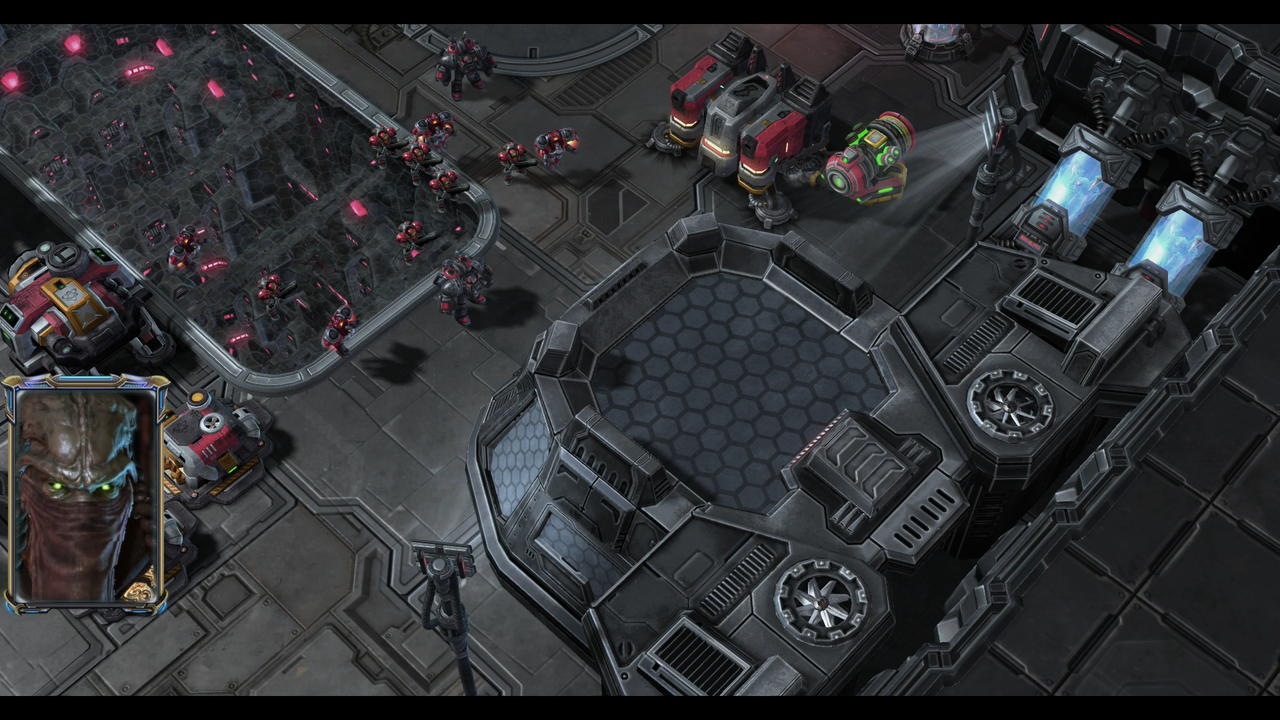 The Creeping Darkness The campaign in Legacy of the Void is broken into three parts: a prologue, the main campaign, and the epilogue. In the prologue (“Whispers of Oblivion”) you join the Dark Templar Zeratul as he attempts to unravel the final piece of the Xel’Naga prophecy, and thus halt the advance of the forces of darkness in the galaxy. To do this, he will have to find the place where the dark god Amon was resurrected. In the course of three missions, you will travel from a Terran installation to the planet Atrias, the site of a Xel’Naga temple. In the course of this journey you will meet one of the commanders of Artanis, Praetor Talis. Some of her troops have been taken captive, and one of your first tasks will be to help her rescue them. They’re apparently being held within the Xel’Naga temple on Atrias.

In the main campaign (“Legacy of the Void”), Zeratul attempts to convince the Artanis, leader of the Protoss Golden Armada, that Amon is alive again, which would mean halting his invasion of the Zerg-infested homeworld of Aiur. This turns out to be a lot more difficult than he expected it to be – Artanis doesn’t believe Zeratul, and begins the invasion in earnest. During the ensuing battle, Amon steps into the fray, unleashing destruction and chaos across the planet.

This final chapter in the story of StarCraft II raises the bar once again, with a plot that’s capable of capturing players’ imaginations and making those new to the series eager to learn more. 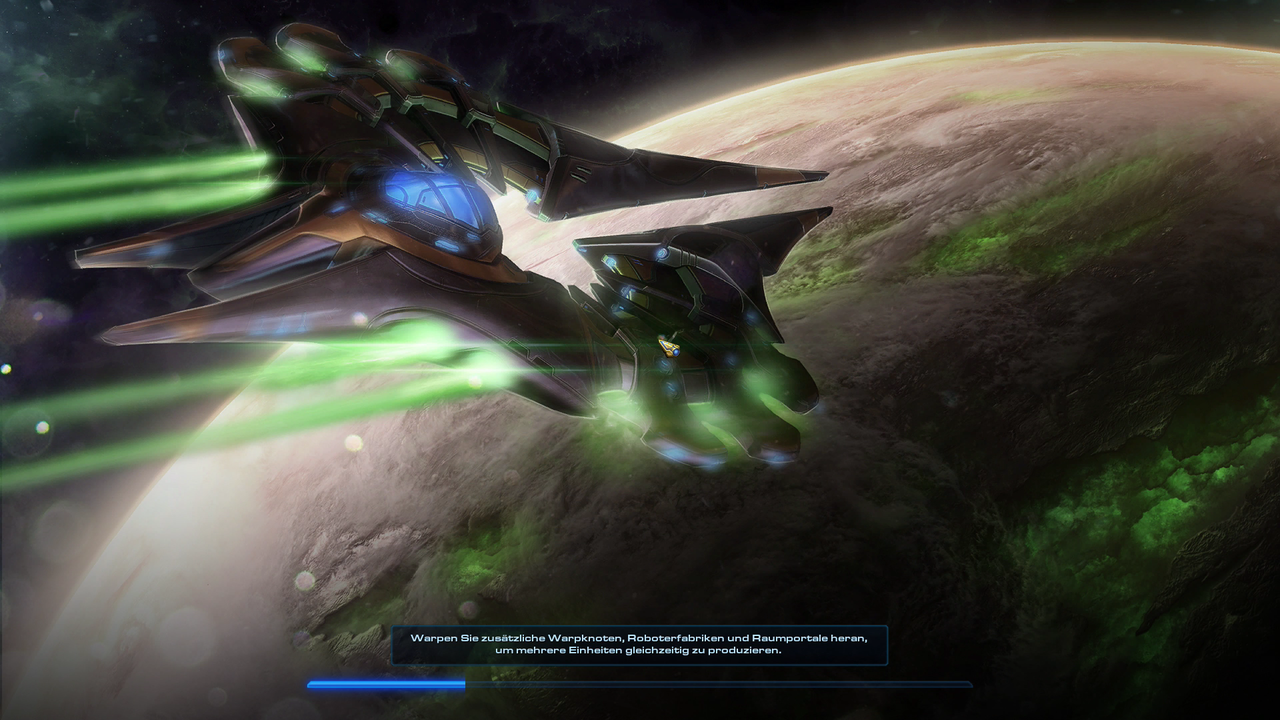 25 Missions for a Whole Lot of Fun If you’ve never played StarCraft II, I recommend you start with the original game, StarCraft II: Wings of Liberty, if only to make sure you understand how the gameplay mechanics and the controls work. In the Legacy of the Void prologue, the developers seem to be assuming that players know what they’re doing. Like I mentioned above, it’s called “Whispers of Oblivion”, and you’ll see that the name really fits.

The main campaign does provide a few tips here and there, but if you’re new to the game and don’t know what you’re supposed to building in the first place, it’s still not enough. Since Legacy of the Void is a standalone game and you don’t need to have any of the previous installments to play it, Blizzard really should have included some kind of tutorial for new players. Overall, the main campaign consists of 25 missions, each of which should take you about 15-60 minutes to finish, though of course this depends on how familiar you are with the game mechanics, whether you want to complete all the bonus missions or not, and last but not least, what difficulty you’re playing on. 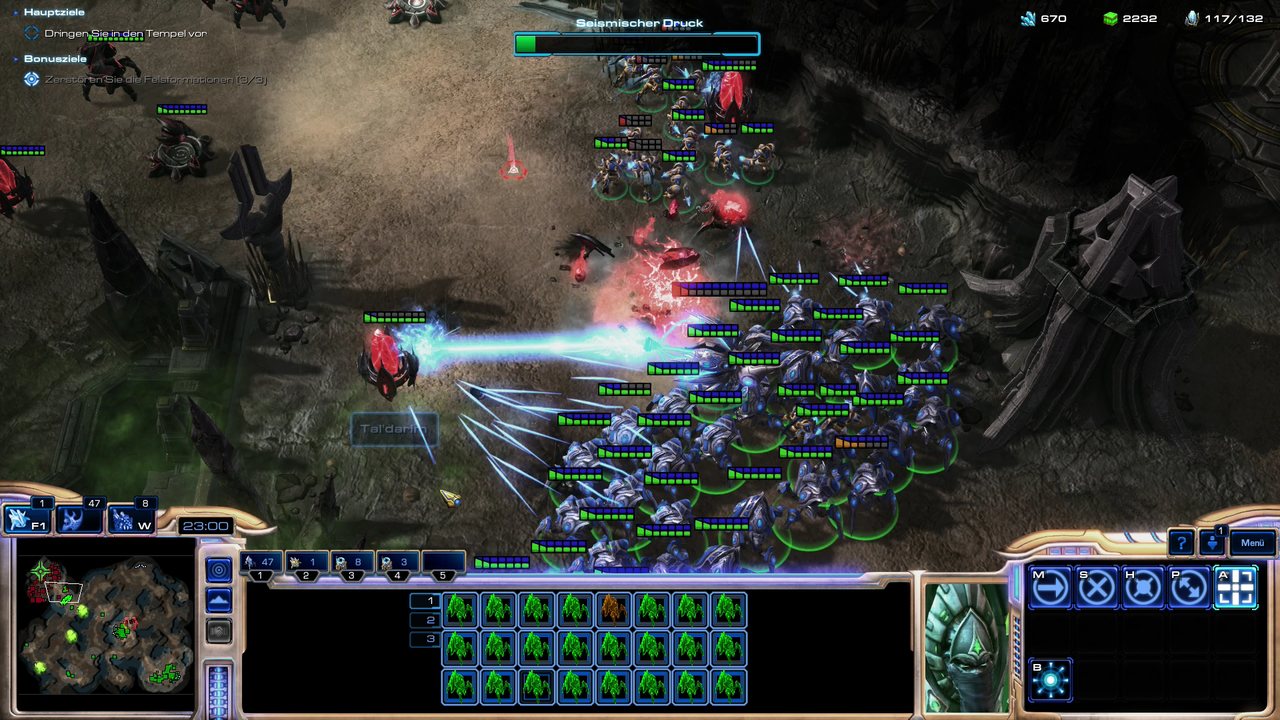 Speaking of difficulty – there are four different levels in all, “Casual” (for total noobs), “Normal” (for players with a bit of experience), “Hard” (for players who want a bit of a challenge), and “Brutal”, which truly lives up to its name. Compared to Heart of the Swarm, everything’s a bit harder, a bit more of a challenge, and a bit more capable of sending players into a panic. Each mission has three objectives to aim for, which can be completing the mission in general, completing the mission within a certain time-frame, capturing certain objects, and much more. And then there are hidden objectives for you to find too. 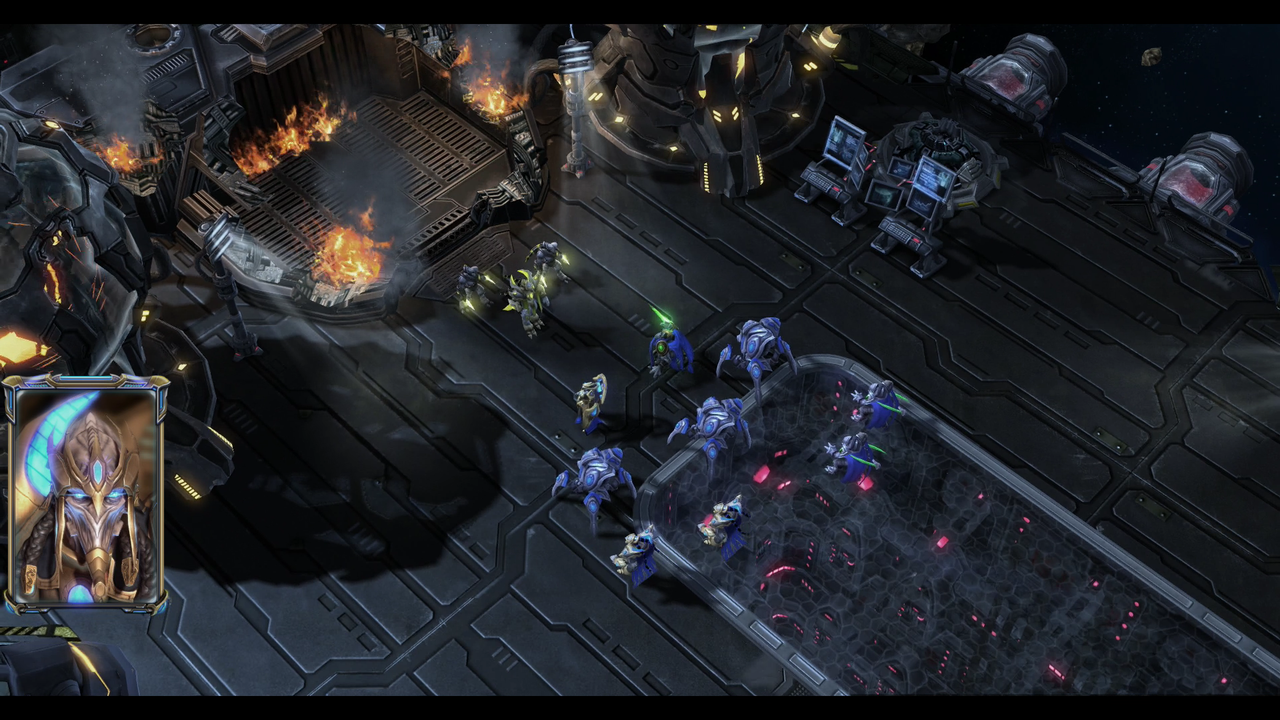 Your time between missions is spent aboard the Protoss “arkship” Spear of Adun, where you can assemble your units for, engage in conversation with various other characters, select your next mission, or use solarite to upgrade its abilities. Solarite is mostly gained by completing optional objectives during individual missions. You can use solarite to decrease the warp-in times for buildings, or increase the initial supply available to you at the start of each mission, which means you won’t have to warp in as many pylons. And speaking of pylons – the pylon on the bridge wants you to examine it.

Is This a Game or a Movie? The graphics in Legacy of the Void “feel” a bit better that they did in Heart of the Swarm. When it comes to video sequences, there’s nothing to say in Blizzard’s case except that the team knows what they’re doing and it shows. The videos are beautifully designed, fun to watch, and really look like they’re part of a feature-length film. Blizzard is truly on top of things here.

And as far as sound goes, everything sounds like you’d expect it to, which is probably because they just carried over the sound effects from the previous installments, ensuring that Legacy of the Void is clearly recognizable as StarCraft II. And I’m glad they did it this way, since everything fits in perfectly. The voice acting sounds genuine, and the actors do a great job. And the soundtrack they play during the actual gameplay and the video sequences is pleasant, sophisticated, and authentic. 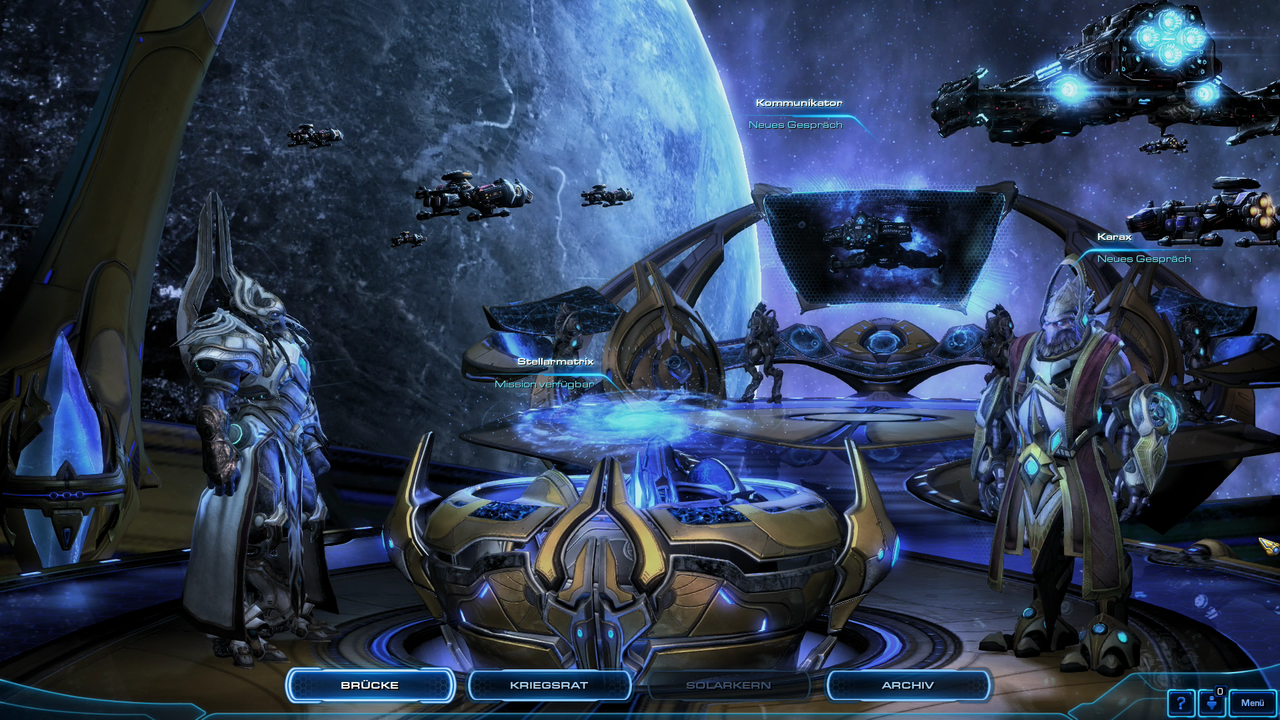 I think StarCraft is an excellent series, and I've played every game and every expansion since the first one was released way back in 1998. So I know what I'm talking about when I say that I can recommend Legacy of the Void to just about anybody. One exception would be for players new to the series, who I think should play through the story from the beginning and not try to come in in the middle of things. Of course, that doesn’t mean you couldn’t do that if you wanted to – Legacy of the Void is a standalone game after all, so anyone who wants to buy it can play it.

I was really excited to have the chance to review the Collector’s Edition. As a long-time fan, I really couldn’t ask for more. The contents are excellent, the field manual is chock-full of useful information, the behind-the-scenes DVD/Blu-ray is interesting, and of course the soundtrack is awesome. And at just $79.99, it’s not all that expensive compared to other collector’s editions. (Dominik Probst; translation by Chase Faucheux)

pls send me a key

keyy plz i will provide the best feedback i can

omg I wish to have this game so much :) Key please

pleas can i have a code

Please send me 1 key at

Please very please can I have a code?

Please give me key, I love this game and this site.

PLEAS SEND ME A KEY :

send me key plis i rly wana play this game

send me the key plz plzz

pls give me to

may i please have a key to dragonkaylyengmail.com

and me key please

please send me a key

send me the key plz plzz

please any key for me pls pls pls :)

StarCraft II: Legacy of the Void